Easter Fun – How to make your own easter eggs!!

Easter Holidays are the best time after Christmas and it’s the first Holiday after a hard first quarter at school.  So we have been thinking of economical ways to spend the Easter holiday as well as entertaining the children.

Easter eggs are tradition and making them are just as fun as eating them.  Here is a recipe of how to make chocolate easter eggs… enjoy

Easter Fun – How to make your own easter eggs!!

Making your own Easter eggs is a fun task to do with the kids – and it’s not as hard to do as you might think. All you need is an Easter egg mould.
If you want to make your chocolate as shiny as the eggs you can buy in the shops, we would recommend tempering the chocolate before you use it. Tempering chocolate is a little fiddly so if you’re just making them for friends and family, we think plain old melted chocolate works just fine.

It’s easier to work with more chocolate than you need, so that you’ve extra to swirl around the moulds. Exact quantities aren’t given as it depends on the size of moulds that you’re using. We made ours using dark, milk and white chocolate, in assorted sizes, and we tried to make each one look slightly different.

Top tip: Woman’s Weekly cookery editor Sue McMahon suggests wearing cotton gloves (get white ones from chemists) when handling the eggs to avoid getting fingermarks on them Ensure that the moulds are very clean, and polish the insides with cotton wool, to ensure that they are dust and grease-free. The shinier the mould, the shiner the chocolate will be when it comes out of it. For unpatterned eggs, spoon several spoonfuls of tempered chocolate into a mould and keep rotating the mould, with the chocolate running right up to the top edge. Tip out any excess chocolate. Draw a palette knife along the top of the mould to give a straight edge. Leave chocolate to set. If it looks thin or patchy, repeat with another layer of chocolate. Place the mould in the fridge for about 10 mins until chocolate is very firm. 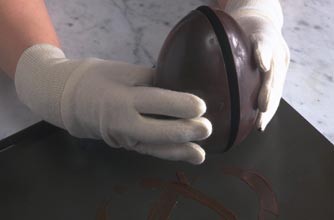 If you like, you can decorate with ribbon bows – either tie the ribbon around the egg or stick a bow on with a dab of chocolate. Or you can pipe on an inscription in tempered chocolate. 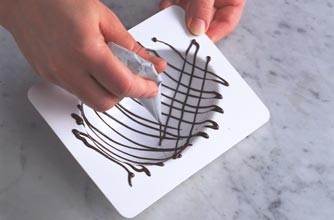 For the set-in zigzag design, use contrasting colours of chocolate. Fill a piping bag with one colour of chocolate and cut off the end to give a small hole. Pipe lines across mould, in several directions.

Use a small palette knife to remove surplus around top of mould. Leave to set, then coat mould with the contrasting colour chocolate as in Steps 2-3. For the set-in swirly design, fill a disposable piping bag with one colour of chocolate, and cut off the end of the bag to give a small hole. Pipe continuous ‘e’s in mould, to give swirls. Leave to set, then coat mould with contrasting colour chocolate as in Steps 2-3. You can cover your eggs with fun designs or personalise them for each of the kids. Enjoy and Happy Easter!

GET A FREE
DEBT ASSESSMENT

We can help you reduce your Debt by up to 30%

READ MORE
REQUEST A CALL BACK
We are here to help you become debt free!